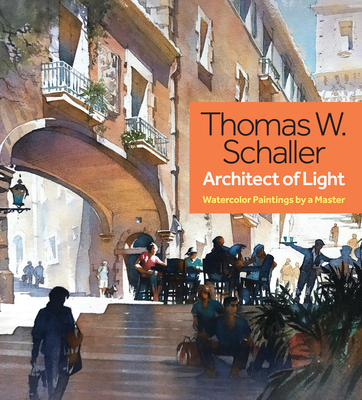 "The most nearly 'perfect' paintings to me are rarely the ones simply characterized by technical expertise. More often, they are the ones in which you can sense the beating heart of the artist just below the surface--flaws included."

Twenty years into a career as architect and architectural illustrator, Thomas Schaller embarked upon a bold new path as a fine artist. Today he is one of the world's most accomplished watercolor artists, celebrated for his poignant treatment of light and its dynamic interplay with the natural and manmade landscape.

The first and only collection of work from this popular contemporary artist, Thomas W. Schaller: Architect of Light features 150 of his finest paintings--buildings, bridges, boats, people and other scenes from around the world. In a series of essays, Schaller ruminates on his journey as an artist, what drives him, and the "truths" he's discovered along the way. He offers not only sage insight on composition, color and other technical aspects of painting, but also provocative perspective on more fundamental struggles for the artist, such as overcoming self-doubt and honing one's own, unique voice.

Schaller's essays, like his art, shine with passion, authenticity, and the epiphanies that comprise his artistic constellation: discovering the power of breathing...the secret to "finding the art" in any subject...and how the quest for perfection led him to worry less about the final result to take greater joy in the process itself. It's a pivoting read for collector, art-lover and practicing artist alike, full of views to savor and enlighten.
Thomas W. Schaller is an award-winning artist, architect, author, and instructor. He graduated with honors from the Ohio State University School of Architecture, earned the NCARB certification, and was admitted to the American Institute of Architects. He founded Schaller Architectural Design and Illustration in New York City, and over thirty years he became a renowned international architectural artist and concept designer working with many of the world's most celebrated architectural, design, entertainment, advertising, and development firms.

Since he began his fine arts career in 2010, Mr. Schaller's paintings have gained wide international acclaim. His work has won many awards, has been featured in several solo exhibitions, and has been included in a great number of prestigious international arts exhibitions in more than twenty countries around the world. A Signature Member of many arts organizations, including the American Watercolor Society, he is also an Artist Member of the Salmagundi Art Club, NYC and the California Art Club. He is a founding member of the group North American Watercolor Artists.

Mr. Schaller is currently based in Los Angeles.