A Deeper Love Inside: The Porsche Santiaga Story (Hardcover) 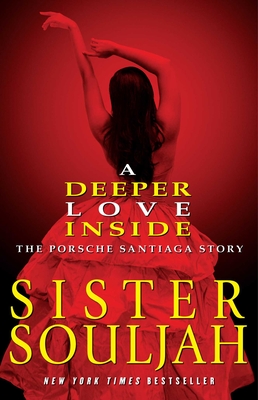 A Deeper Love Inside: The Porsche Santiaga Story (Hardcover)


Email or call for price
In the New York Times bestseller from the author of the Coldest Winter Ever, the Santiaga family saga continues, this time told by Porsche Santiaga, Winter’s fiery younger sister.

At last, mega-bestselling author Sister Souljah delivers the stunning follow-up to The Coldest Winter Ever that fans have been eagerly waiting for. Frighteningly fierce, raw, and completely unpredictable, this coming-of-age adventure is woven with emotional intensity.

A Deeper Love Inside is written in the words of Porsche Santiaga, Winter’s sharp-tongued, quick-witted younger sister. Porsche worships Winter. A natural born hustler, Porsche is also cut from the same cloth as her father, the infamous Ricky Santiaga.

Passionate and loyal to the extreme, Porsche refuses to accept her new life in group homes, foster care, and juvenile detention after her wealthy family is torn apart. Porsche—unique, young, and beautiful—cries as much as she fights and uses whatever she has to reclaim her status.

Unselfishly, she pushes to get back everything that ever belonged to her loving family. In A Deeper Love Inside, fans will encounter their favorite characters from The Coldest Winter Ever, including Winter and Midnight. Sister Souljah’s soulful writing will again move your heart and open your eyes to a shocking reality.
Sister Souljah is a graduate of Rutgers University. During her college years, she was known for her powerful voice, sharp political analysis, cultural allegiance, community organizing, and for her humanity. Post-graduation, Sister Souljah earned the love and support of her African American community by creating a national youth and student movement. She is credited for serving homeless families, creating academic, cultural, and recreational after-school programs, weekend academies, and sleep-away summer camps. Partnering with major mainstream celebrities, she provided her efforts free to all young people and families in need. A multidimensional woman, Souljah was the only female performing artist and voice of Public Enemy. She is also a wife and a mother. A storyteller who makes the entire world her home, she lives wherever she is “pushing her pen.”

“It was a great followup and I highly recommend it.”
— My Less Three

“This is one sequel you cannot put down until the end.”
— Literary Marie

“Readers can expect another fine story as Sister Souljah writes in a heartfelt manner that will leave readers wanting more.”
— The Guardian Express

“Readers are sure to be drawn to this coming-of-age story, told in Sister Souljah’s magnificent signature style”
— Blogging With A Purpose

“A thought provoking coming-of-age story that was definitely worth the wait.”
— Urban Reviews