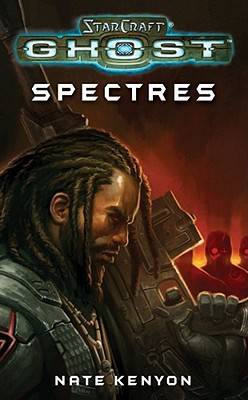 
Email or call for price
Dominion ghosts epitomize the height of terran evolution and physical conditioning. Augmented by technologies that harness their innate psionic potential, these lethal operatives use telepathy and other superhuman powers to isolate and destroy the enemies of the Dominion. But when the hunters become the hunted and ghosts start disappearing without a trace, even the most dangerous human soldiers in the Koprulu sector have something to fear...

Enter Nova Terra, a ghost of unparalleled ability. On orders fromEmperor Arcturus Mengsk, Nova embarks on a secret mission to find her missing comrades. As her investigation leads down a maze of dark corridors, painful memories of her pre-ghost years begin to surface. Soon, Nova learns that there might be a connection between the missing agents and her past, a discovery that will pit her against both the shadows ofher youth and a terrifying new breed of psionic warrior: spectres.

This is the story that StarCraft fans have been waiting for—a pulse-pounding adventure based on the never-released StarCraft: Ghost tactical-action console game. StarCraft: Ghost—Spectres unveils a tumultuous chapter in Nova’s life and the insidious origins of the spectres featured in StarCraft II: Wings of Liberty, the record-breaking sequel to Blizzard Entertainment’s highly praised real-time strategy games StarCraft and StarCraft: Brood War.
Nate Kenyon’s first novel, Bloodstone, was a Bram Stoker Award finalist and won the P&E Horror Novel of the Year award. His second, The Reach, also a Stoker Award finalist, received a starred review from Publishers Weekly and was recently optioned for film. The Bone Factory was called “masterful” by Booklist. His fourth, Sparrow Rock, was released in 2010 He is also the author of Diablo III: The Order and StarCraft: Ghost: Spectres (2011). He is a member of the Horror Writers Association and International Thriller Writers.