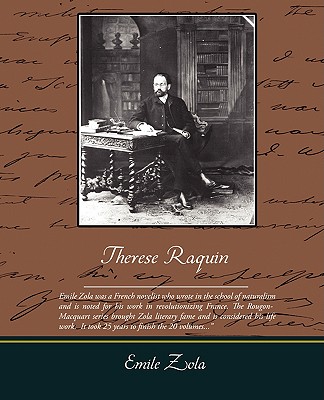 
Usually Ships in 1-5 Days
(This book cannot be returned.)
Emile Zola was a French novelist who wrote in the school of naturalism and is noted for his work in revolutionizing France. The Rougon-Macquart series brought Zola literary fame and is considered his life work. It took 25 years to finish the 20 volumes. The idea of writing the social history of a family encompassing several volumes probably came from his reading the works of Balzac. Zola shows how people in a family who appear to be quite individualistic are actually quite similar. Heredity and proximity determine who we are and how we act. Theresa Raquin was first published in 1867 in serial form in L; Artiste. In 1873 Zola turned the novel into a play. In Theresa Raquin a well-intentioned aunt marries a young woman to her first cousin. Camille is sickly and selfish, and when the opportunity arises, Th r se enters into a tragic affair with Camille's friend Laurent. Zola called this novel a scientific study of temperament instead of a character study making it an example of naturalism.