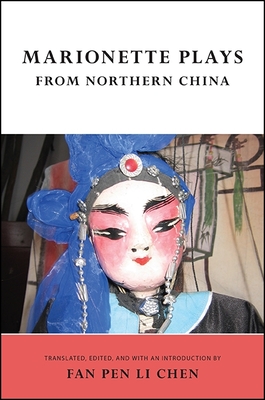 
Email or call for price
Marionette puppet theater has a rich and ancient history in China, extending back to the Han dynasty and reaching its heyday in the Qing dynasty. While this art form is nearly extinct in northern China today, a handful of troupes in Heyang County in Shaanxi Province, which claims to be the birthplace of marionette theater, continue to perform skits and scenes from Heyang's earlier, broader marionette theater repertoire. In this book, Fan Pen Li Chen has collected and translated rare transcriptions of some of the most popular of these plays. Her insightful translations include a rich variety of genres and highlight memorable characters that range from manipulative aristocrats, poor Confucian scholars, and a woman warrior to Baldy Guo, the iconic clown of puppet theater. As the only work in English about the puppet theater of northern China, these translations provide valuable information about the history, religion, social roles, and popular culture of that region. Detailed introductions and annotations for each play, as well as an extensive bibliography, are also included.
Fan Pen Li Chen is Associate Professor of East Asian Studies at the University at Albany, State University of New York. She is the author of Chinese Shadow Theatre: History, Popular Religion, and Women Warriors and Visions for the Masses: Chinese Shadow Plays from Shaanxi and Shanxi.