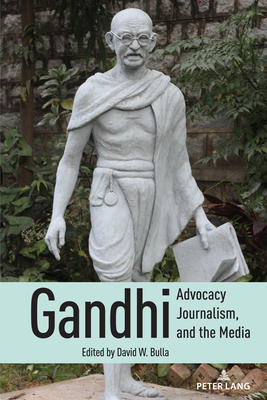 This is book number 29 in the Mass Communication and Journalism series.

This book documents the journalistic career of Mohandas K. Gandhi. Known as the Mahatma and the Father of India, Gandhi was also a journalist. However, he was a not a journalist in the same vein as those working for the New York Times or the BBC. Rather, Gandhi was what is called an advocacy journalist; that is, his journalism served various political, social, and cultural causes--most importantly, in the long run, the Indian independence movement. Among the other key causes were equality, human rights, Muslim-Hindu relations, vegetarianism, chastity, poverty, and hygiene. The chapters in this book were written by authors who attended a conference on Gandhi and media at the University of St. Andrews on the 150th anniversary of Gandhi's birthday, in October 2019. It relies on careful analysis of his newspapers, produced in both South Africa and India, including Indian Opinion, Young India, the Gujarati newspaper Navajivan, and three versions of Harijan, which were in English, Gujarati, and Hindi. The authors also place Gandhi's version of journalism in a historical context of small, family-operated weekly newspapers that were commonplace in the nineteenth century. Finally, the book looks at other media tools Gandhi used to transmit his messages to the public, including his recorded voice for gramophone.

David W. Bulla is a professor of communication at Augusta University. Bulla focuses his research on the history of journalism, examining limitations on press performance. His first book, Lincoln's Censor, was published in 2008. Bulla and Gregory A. Borchard had their book Journalism in the Civil War Era published by Peter Lang in 2010. Bulla and David S. Sachsman are co-authors of Sensationalism: Murder, Mayhem, Mudslinging, Scandals, and Disasters in 19th Century Reporting published in 2013. In 2015, Lincoln Mediated: The President and the Press through Nineteenth Century Media was published, co-authored once again with Professor Borchard. Bulla also is assistant editor of The Southeastern Review of Journalism History. Bulla earned a Ph.D. in mass communication from the University of Florida.