Get the Truth: Former CIA Officers Teach You How to Persuade Anyone to Tell All (CD-Audio) 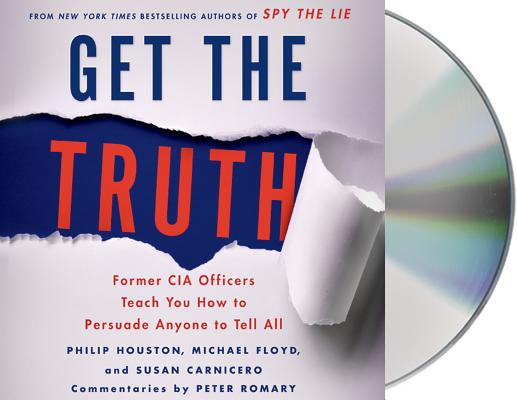 Get the Truth: Former CIA Officers Teach You How to Persuade Anyone to Tell All (CD-Audio)

Getting someone to tell the truth is an essential skill that very few people possess. In the boardroom, classroom, or our own homes, every day we interact with others and try to get the truth from them.

People are often untruthful out of fear of negative consequences associated with divulging information. But if a person is made to forget the long-term outcomes, he or she can be influenced to disclose sensitive information that's being withheld. The aim is to encourage the person to remain in short-term thinking mode, shifting focus away from the long-term ramifications of telling the truth.

As former CIA agents and bestselling authors of Spy the Lie, Philip Houston, Mike Floyd, and Susan Carnicero are among the world's best at recognizing deceptive behavior and eliciting the truth from even the most accomplished liars. Get the Truth is a step-by-step guide that empowers readers to elicit the truth from others. It also chronicles the fascinating story of how the authors used a methodology Houston developed to elicit the truth in the counterterrorism and criminal investigation realms, and how these techniques can be applied to our daily lives. Using thrilling anecdotes from their careers in counterintelligence, and with easy-to-follow instructions, the authors provide a foolproof means of getting absolutely anybody to give an honest answer.

Get the Truth is the easy and effective way to learn how to get the truth every time.

Jeff Gurner is a voice, stage and screen actor. He has recorded hundreds of radio and television commercials, video games, and is an award winning audiobook narrator. He is best known for his narration of Patrick Lee and to Karen Miller’s The Star Wars Clone Wars series and works by Mark Sullivan and Terry Francona. AudioFile magazine praised Jeff''s "deep, compelling voice and well-acted presentation" and awarded him a 2006 AudioFile Earphones Award for Jennifer Egan’s The Keep.