Fields of Honor: Pivotal Battles of the Civil War (Paperback) 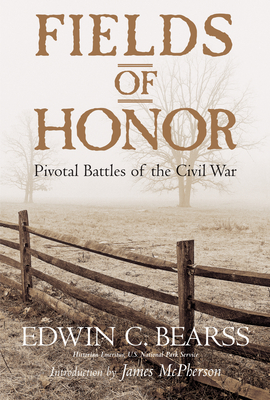 Fields of Honor: Pivotal Battles of the Civil War (Paperback)


Usually Ships in 1-5 Days
Few historians have ever captured the drama, excitement, and tragedy of the Civil War with the headlong elan of Edwin Bearss, who has won a huge, devoted following with his extraordinary battlefield tours and eloquent soliloquies about the heroes, scoundrels, and little-known moments of a conflict that still fascinates America. Antietam, Shiloh, Gettysburg: these hallowed battles and more than a dozen more come alive as never before, rich with human interest and colorful detail culled from a lifetime of study.

Illustrated with detailed maps and archival images, this 448-page volume presents a unique narrative of the Civil War's most critical battles, translating Bearss' inimitable delivery into print. As he guides readers from the first shots at Fort Sumter to Gettysburg's bloody fields to the dignified surrender at Appomattox, his engagingly plainspoken but expert account demonstrates why he stands beside Shelby Foote, James McPherson, and Ken Burns in the front rank of modern chroniclers of the Civil War, as the Pulitzer Prize-winning McPherson himself points out in his admiring Introduction.

A must for every one of America's countless Civil War buffs, this major work will stand as an important reference and enduring legacy of a great historian for generations to come.
Edwin C. Bearss is legendary among serious scholars and Civil War buffs alike. The former Chief Historian of the National Park Service and its current historian emeritus, Bearss' renowned tours of America's battlefields feature a uniquely engaging panache that has inspired a legion of fans. He has consulted on numerous books, documentaries, and films, including Gods and Generals and Ken Burns' The Civil War. The author of 13 books, he has been honored many times for his tireless advocacy of the historical preservation of Civil War battlefield sites.
"Every epic deserves a Homer. In Ed Bearss, the Civil War may have finally gotten one." —The Washington Times