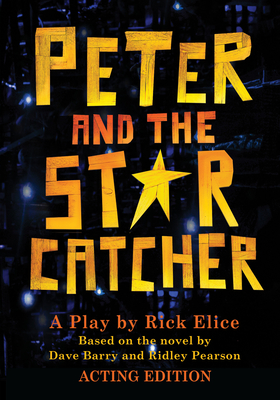 
Usually Ships in 1-5 Days
"The most exhilarating Broadway storytelling in decades! You must experience it yourself." - Ben Brantley, New York Times
A young orphan and his mates are shipped from Victorian England to a distant island ruled by evil King Zarboff. They know nothing of the mysterious trunk in the captain's cabin, containing a precious, otherworldly cargo. At sea the boys are discovered by a precocious young girl named Molly, a Star-catcher in training, who realizes that the trunk's precious cargo is starstuff, a celestial substance so powerful it must not fall in the wrong hands.
When the ship is taken over by pirate - led by the fearsome Black Stache, a villain determined to claim the trunk and treasure for his own dubious dreams of world domination - the journey quickly becomes fraught with danger threatening the lives of Molly and the boys.
This Tony-Award winning, magical and hilarious adventure at least reveals the origins of Peter Pan, The Lost Boys, Wendy, their piratical nemesis, Captain Hook - and a far-off place known as Neverland.
Searching for that perfect gift for the Broadway fan in your life? Explore more from Disney Editions:

Rick Elice saw his first Broadway show when he was three. His mother said he was very well behaved. That night he dreamed of working in the theater. And since the age of nineteen he has. Along with Marshall Brickman he wrote Jersey Boys which won the Tony, Grammy, and Olivier awards for Best Musical. Other musicals include Turn of the Century and The Addams Family. He has a BA from Cornell, an MFA from the Yale School of Drama, and was a teach fellow at Harvard while a charter member of the American Repertory Theater. He lives in New York City.