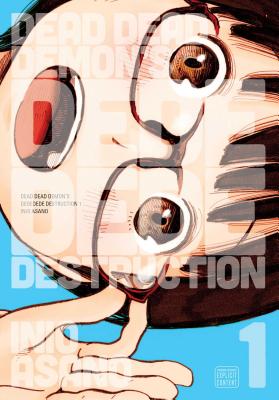 This is book number 1 in the Dead Dead Demon’s Dededede Destruction series.

Nothing was ever the same again.

But after a while, even impending doom starts to feel ordinary.

The Japan Self-Defense Forces are still looking for a way to combat the alien threat, but so far conventional weapons have had no effect. Maybe it’s time to try something unconventional.

Meanwhile, Kadode Koyama and her best friend avidly track the aliens’ movements on social media and less enthusiastically study for college entrance exams. When the end of the world looms overhead, you learn to take things one step at a time.
Inio Asano, a bona fide earthling, was born in Ibaraki, Japan, in 1980. In 2001, his short story “Uchu kara Konnichiwa” (Hello from Outer Space) won the first Sunday GX Rookie Prize. Later, GX published his series Subarashii Sekai, available in English from VIZ Media as What a Wonderful World! His other works include Hikari no Machi (City of Light), Nijigahara Holograph and Umibe no Onna no Ko (A Girl on the Shore), as well as solanin and Goodnight Punpun, also available from VIZ Media.