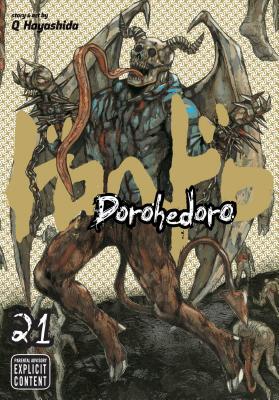 This is book number 21 in the Dorohedoro series.

All mysteries lead back to the Hole! Our labyrinthine tale is nearing its end, but it’s not over quite yet. Caiman and Nikaido, Risu and the En family, and all of the embattled characters who made a miraculous recovery in our previous volume gear up fight the Cross-Eyes’ boss in a no-holds-barred battle royale! This is going to be full-throttle mayhem!
Known for her bold style and seamless creation of alternate universes, QHayashida made her manga debut with Maken X Another, which ran in Magazine Z and was subsequently adapted into a video game. She followed this series with a sequel, Maken X Another Jack. Dorohedoro is her latest series.