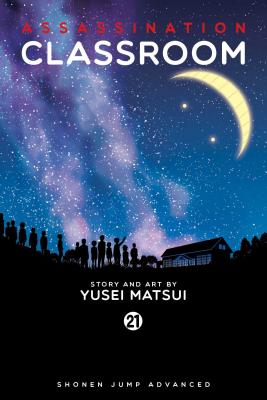 This is book number 21 in the Assassination Classroom series.

In the aftermath of tragedy, the students of 3-E nevertheless march proudly in their graduation ceremony. Will their futures still unfold as planned? And what will they do with their reward money…? Then, enjoy a long side story revealing what Koro Sensei was really up to over winter break! Can Koro Sensei truly make a friend and ally out of anyone…?! Plus, a bonus short story with all-new characters, set in a dystopian future.
Yusei Matsui was born on the last day of January in Saitama Prefecture, Japan. He has been drawing manga since he began elementary school. Some of his favorite manga series are Bobobo-bo Bo-bobo, JoJo's Bizarre Adventure, and Ultimate Muscle. Matsui learned his trade working as an assistant to manga artist Yoshio Sawai, creator of Bobobo-bo Bo-bobo. In 2005, Matsui debuted his original manga Neuro: Supernatural Detective in Weekly Shonen Jump. In 2007, Neuro was adapted into an anime. In 2012, Assassination Classroom began serialization in Weekly Shonen Jump.