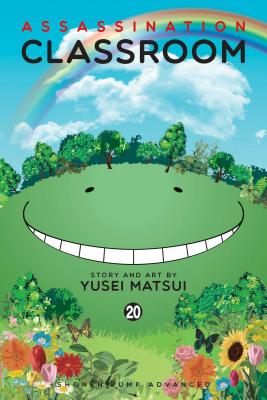 This is book number 20 in the Assassination Classroom series.

The battle for Koro Sensei’s life against a multinational operation’s soldiers and weaponry is difficult enough, but now his creator, mad scientist Yanagisawa, and his former protégé, Grim Reaper II, join the battle to destroy him—and they’ve both had major enhancements! But the stakes abruptly change when a 3-E student is fatally caught in the crossfire… If there’s one thing that enrages 3-E’s teacher, it’s harming—let alone killing—his students! Koro Sensei’s fury and ingenuity know no bounds, even as fate inexorably catches up to him…
Yusei Matsui was born on the last day of January in Saitama Prefecture, Japan. He has been drawing manga since he began elementary school. Some of his favorite manga series are Bobobo-bo Bo-bobo, JoJo's Bizarre Adventure, and Ultimate Muscle. Matsui learned his trade working as an assistant to manga artist Yoshio Sawai, creator of Bobobo-bo Bo-bobo. In 2005, Matsui debuted his original manga Neuro: Supernatural Detective in Weekly Shonen Jump. In 2007, Neuro was adapted into an anime. In 2012, Assassination Classroom began serialization in Weekly Shonen Jump.