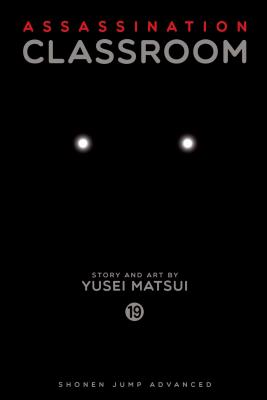 This is book number 19 in the Assassination Classroom series.

Koro Sensei’s lessons in verbal defense are put to the test when Karma must use his brains instead of his brawn to rescue a classmate. Then things finally begin to go smoothly for the students of 3-E. Everyone receives some good news about their futures, and Nagisa settles on a career goal. But the peace is broken when the world’s nations miraculously manage to coordinate their efforts long enough to launch a plan to assassinate Koro Sensei—with the aid of the strongest mercenary in the world and an ultimate weapon! Will anyone break ranks to protect everyone’s favorite tentacled teacher…?
Yusei Matsui was born on the last day of January in Saitama Prefecture, Japan. He has been drawing manga since he began elementary school. Some of his favorite manga series are Bobobo-bo Bo-bobo, JoJo's Bizarre Adventure, and Ultimate Muscle. Matsui learned his trade working as an assistant to manga artist Yoshio Sawai, creator of Bobobo-bo Bo-bobo. In 2005, Matsui debuted his original manga Neuro: Supernatural Detective in Weekly Shonen Jump. In 2007, Neuro was adapted into an anime. In 2012, Assassination Classroom began serialization in Weekly Shonen Jump.