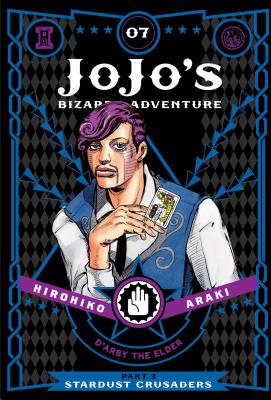 JoJo and friends continue to close in on their nemesis, DIO! Their travels take them across the Middle East, where they face new and more powerful enemies—a mysterious woman with magnetic powers, a strange man with the ability to control time and a smooth gambler who deals in souls. Will they die before they even get to DIO?!
Hirohiko Araki made his manga debut in 1981 with the Wild West story Busô Poker. He experimented with several genres, including mystery (Mashonen B.T.) and action-horror (Baoh), before beginning JoJo’s Bizarre Adventure in 1986. Propelled by imaginative storylines, weird imagery and individualistic artwork, JoJo’s Bizarre Adventure is one of the longest-running and most popular shonen manga ever. Araki’s current works include a new series set in the JoJo universe, JoJolion.