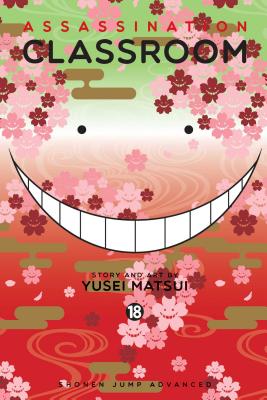 This is book number 18 in the Assassination Classroom series.

Nagisa and Karma travel to the International Space Station in hopes of learning the secret to saving Koro Sensei’s life. Meanwhile, Yanagisawa and the upstart Grim Reaper II train ever harder to assassinate him. Then, when academic setbacks lower the spirits of his students, Koro Sensei comes up with an ingenious—or perhaps idiotic—way to cheer them up. Next, Valentine’s Day arrives! Will any of the 3-E students or teachers find true love? And will the meddling and teasing of the others help or hinder Cupid’s arrow in finding its target…?
Yusei Matsui was born on the last day of January in Saitama Prefecture, Japan. He has been drawing manga since he began elementary school. Some of his favorite manga series are Bobobo-bo Bo-bobo, JoJo's Bizarre Adventure, and Ultimate Muscle. Matsui learned his trade working as an assistant to manga artist Yoshio Sawai, creator of Bobobo-bo Bo-bobo. In 2005, Matsui debuted his original manga Neuro: Supernatural Detective in Weekly Shonen Jump. In 2007, Neuro was adapted into an anime. In 2012, Assassination Classroom began serialization in Weekly Shonen Jump.