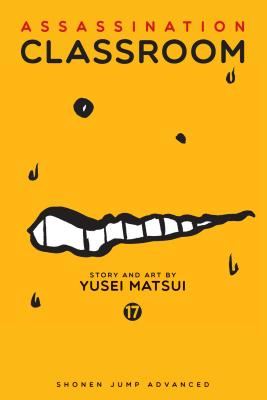 This is book number 17 in the Assassination Classroom series.

The class is divided: one half wants to carry on with the plan to assassinate Koro Sensei, while the other half wants to save him. So Koro Sensei splits them into two teams, led by Nagisa and Karma, and has them battle it out. The students of 3-E draw on everything they’ve learned so far to battle for or against Koro Sensei’s life! Then, to uphold their now unified goal, they need to infiltrate the International Space Station…
Yusei Matsui was born on the last day of January in Saitama Prefecture, Japan. He has been drawing manga since he began elementary school. Some of his favorite manga series are Bobobo-bo Bo-bobo, JoJo's Bizarre Adventure, and Ultimate Muscle. Matsui learned his trade working as an assistant to manga artist Yoshio Sawai, creator of Bobobo-bo Bo-bobo. In 2005, Matsui debuted his original manga Neuro: Supernatural Detective in Weekly Shonen Jump. In 2007, Neuro was adapted into an anime. In 2012, Assassination Classroom began serialization in Weekly Shonen Jump.