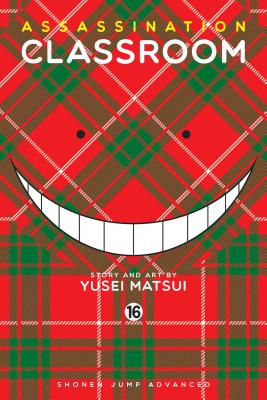 This is book number 16 in the Assassination Classroom series.

Koro Sensei tells all: his former profession, his nickname, the mad scientists responsible for his unique cephalopod physiognomy, the love of his life, and why he wants to teach the 3-E students. New light is shed not only on his character, but on the reason he vowed to destroy the Earth in March. Will these revelations change 3-E’s commitment to assassinating their teacher (and saving the planet)?
Yusei Matsui was born on the last day of January in Saitama Prefecture, Japan. He has been drawing manga since he began elementary school. Some of his favorite manga series are Bobobo-bo Bo-bobo, JoJo's Bizarre Adventure, and Ultimate Muscle. Matsui learned his trade working as an assistant to manga artist Yoshio Sawai, creator of Bobobo-bo Bo-bobo. In 2005, Matsui debuted his original manga Neuro: Supernatural Detective in Weekly Shonen Jump. In 2007, Neuro was adapted into an anime. In 2012, Assassination Classroom began serialization in Weekly Shonen Jump.