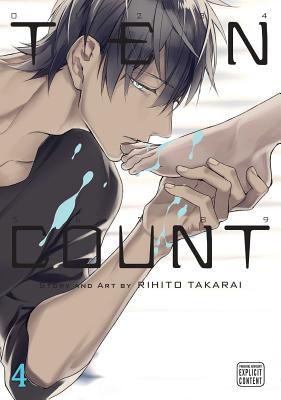 This is book number 4 in the Ten Count series.

At the mercy of Kurose’s hands and words, Shirotani finally hears the full reason Kurose fell in love with him. The truth is such a surprise that Shirotani runs away from him in shock, and it isn’t long before his body starts aching for Kurose’s touch, causing Shirotani to soothe his own desire. But in doing so, he scares up memories of the traumatic event at the core of his compulsion.
This is Rihito Takarai’s second English-language release, with her first being Seven Days. She has also been published in French, Spanish, and German. Born in Hiroshima Prefecture in October, she’s a Libra with an O blood type.