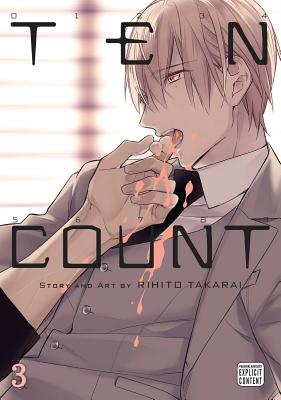 This is book number 3 in the Ten Count series.

While out on the town with Kurose, Shirotani daydreams about the younger man kissing him. His desire quickly overcomes his phobia of human touch, and he gives himself over to his counselor’s hands for relief. Watch as the relationship between the corporate secretary and his counselor continues to boil over in this story of love and therapy.
This is Rihito Takarai’s second English-language release, with her first being Seven Days. She has also been published in French, Spanish, and German. Born in Hiroshima Prefecture in October, she’s a Libra with an O blood type.