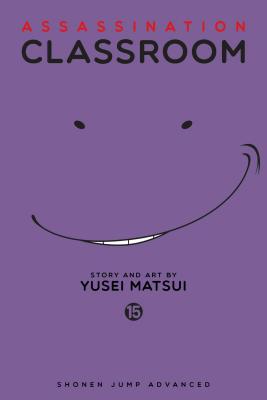 This is book number 15 in the Assassination Classroom series.

Several secret pasts are finally revealed this volume: The tragedy that led Principal Asano to develop his harsh—some would say brutal, sadistic and inhumane—pedagogical methods, the relationship that gives one 3-E student a personal motivation to assassinate her teacher, and even Koro Sensei’s origin story! Will the students be more or less motivated to assassinate their teacher after they know his former secret identity? And what lengths will shy Nagisa go to in order to rein in the student who wants to get revenge on Koro Sensei? Also, it’s time for…lunch theater! Which member of 3-E will be the star?
Yusei Matsui was born on the last day of January in Saitama Prefecture, Japan. He has been drawing manga since he began elementary school. Some of his favorite manga series are Bobobo-bo Bo-bobo, JoJo's Bizarre Adventure, and Ultimate Muscle. Matsui learned his trade working as an assistant to manga artist Yoshio Sawai, creator of Bobobo-bo Bo-bobo. In 2005, Matsui debuted his original manga Neuro: Supernatural Detective in Weekly Shonen Jump. In 2007, Neuro was adapted into an anime. In 2012, Assassination Classroom began serialization in Weekly Shonen Jump.