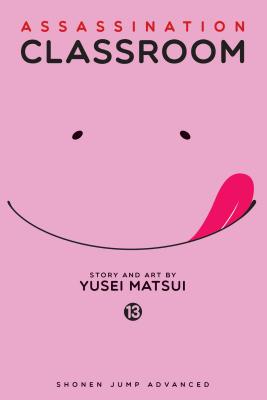 This is book number 13 in the Assassination Classroom series.

The Grim Reaper sets up a lethal trap that buries Mr. Karasuma and Ms. Vitch alive. Will Mr. Karasuma’s repressed feelings surface before he and Ms. Vitch do? And how will Mr. Karasuma face Death? Then, despite his vow to destroy the planet in March, Koro Sensei offers career counseling to his students. Nagisa’s professional goal raises some serious issues. And finally, it’s time for the next school festival showdown. Class A and Class E compete for the most customers. If they build it, will they come…to the top of 3-E’s remote mountaintop?
Yusei Matsui was born on the last day of January in Saitama Prefecture, Japan. He has been drawing manga since he began elementary school. Some of his favorite manga series are Bobobo-bo Bo-bobo, JoJo's Bizarre Adventure, and Ultimate Muscle. Matsui learned his trade working as an assistant to manga artist Yoshio Sawai, creator of Bobobo-bo Bo-bobo. In 2005, Matsui debuted his original manga Neuro: Supernatural Detective in Weekly Shonen Jump. In 2007, Neuro was adapted into an anime. In 2012, Assassination Classroom began serialization in Weekly Shonen Jump.