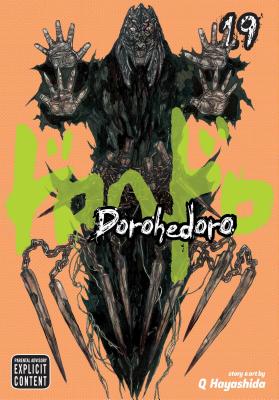 This is book number 19 in the Dorohedoro series.

After an emotional reunion with Caiman, Nikaido receives a cryptic hint from a mysterious Devil on how to escape from deep within the Central Department Store. Meanwhile, with the En family spread about a bleak landscape, Fulita, Chota and Turkey must attempt to get the situation back on their terms. And now, in the shadow of a Devil vs. Devil battle, no one can catch the boss as he drags his secretive tube, while the Central Department Store is becoming more and more confusing. Who will be left standing at the end?
Known for her bold style and seamless creation of alternate universes, QHayashida made her manga debut with Maken X Another, which ran in Magazine Z and was subsequently adapted into a video game. She followed this series with a sequel, Maken X Another Jack. Dorohedoro is her latest series.