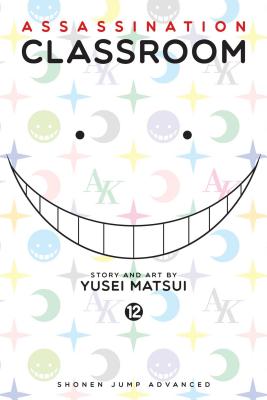 This is book number 12 in the Assassination Classroom series.

Mr. Karasuma gives the 3-E students superpowered uniforms…with great results. What amazing feats will they perform in their snazzy new outfits? Then, Mr. Karasuma gives Ms. Vitch a bouquet for her birthday…with disastrous results. Next, a 3-E teacher is kidnapped by master assassin the Grim Reaper, who threatens to kill his hostage if the students tell anyone. Their rescue attempt goes horribly awry, and soon they are the ones in need of rescuing! But at what cost to the world…?
Yusei Matsui was born on the last day of January in Saitama Prefecture, Japan. He has been drawing manga since he began elementary school. Some of his favorite manga series are Bobobo-bo Bo-bobo, JoJo's Bizarre Adventure, and Ultimate Muscle. Matsui learned his trade working as an assistant to manga artist Yoshio Sawai, creator of Bobobo-bo Bo-bobo. In 2005, Matsui debuted his original manga Neuro: Supernatural Detective in Weekly Shonen Jump. In 2007, Neuro was adapted into an anime. In 2012, Assassination Classroom began serialization in Weekly Shonen Jump.