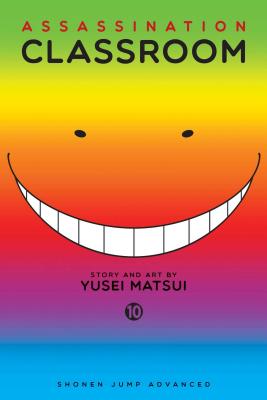 This is book number 10 in the Assassination Classroom series.

The students of 3-E turn a surplus of eggs to good use—in pursuit of their usual goal. Karasuma teaches them the art of parkour while Koro Sensei teaches them the game of cops and robbers. Then, someone is stealing lingerie, and naturally Koro Sensei is the prime suspect! But is he being framed…and if so, by whom? Lastly, biologically modified Itona discovers that sometimes tentacles can be a burden rather than a gift. He puts everything he’s got into his latest assassination attempt on Koro Sensei…but who will save Itona from himself?!
Yusei Matsui was born on the last day of January in Saitama Prefecture, Japan. He has been drawing manga since he began elementary school. Some of his favorite manga series are Bobobo-bo Bo-bobo, JoJo's Bizarre Adventure, and Ultimate Muscle. Matsui learned his trade working as an assistant to manga artist Yoshio Sawai, creator of Bobobo-bo Bo-bobo. In 2005, Matsui debuted his original manga Neuro: Supernatural Detective in Weekly Shonen Jump. In 2007, Neuro was adapted into an anime. In 2012, Assassination Classroom began serialization in Weekly Shonen Jump.