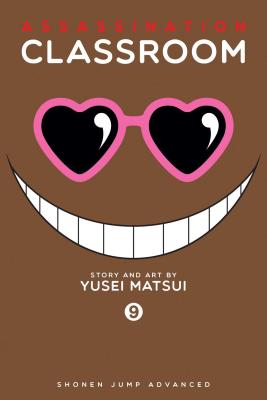 This is book number 9 in the Assassination Classroom series.

Nagisa risks it all in an attempt to take down the mastermind behind the biological attack on his classmates. After the dust settles, Koro Sensei gives his all to ignite summer romance between his students. Turns out their English teacher Ms. Jelavitch has her sights on someone…and everyone wants to help her get her target—er, the man of her dreams. Then, back at school, one of the students defects from the 3-E ranks for all the wrong reasons. How will they win him back before he inflicts irrevocable damage on them all…?!
Yusei Matsui was born on the last day of January in Saitama Prefecture, Japan. He has been drawing manga since he began elementary school. Some of his favorite manga series are Bobobo-bo Bo-bobo, JoJo's Bizarre Adventure, and Ultimate Muscle. Matsui learned his trade working as an assistant to manga artist Yoshio Sawai, creator of Bobobo-bo Bo-bobo. In 2005, Matsui debuted his original manga Neuro: Supernatural Detective in Weekly Shonen Jump. In 2007, Neuro was adapted into an anime. In 2012, Assassination Classroom began serialization in Weekly Shonen Jump.