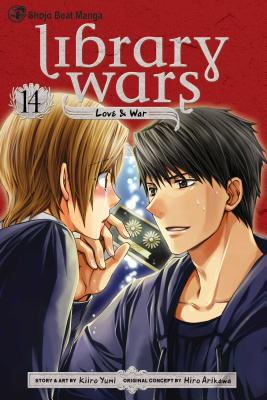 This is book number 14 in the Library Wars: Love & War series.

A New York Times best seller and librarian favorite that will appeal to shojo and non-shojo fans alike!

In the near future, the federal government creates a committee to rid society of books it deems unsuitable. The libraries vow to protect their collections, and with the help of local governments, form a military group to defend themselves--the Library Forces!

The Library Forces have decided that a censored author, Toma, must defect. But as he and the LF attempt to leave the courthouse, the roads are blocked by Media Betterment Committee troops!

Library Forces member Iku Kasahara and her sergeant (and secret crush) Dojo make off in another direction with Toma. But when Dojo is injured in the escape attempt, Iku is charged with protecting both the endangered author and the man she loves!
Kiiro Yumi won the 42nd LaLa Manga Grand Prix Fresh Debut award for her manga Billy Bocchan no Yuutsu (Little Billy’s Depression). Her latest series is Toshokan Senso Love&War (Library Wars: Love & War), which ran in LaLa magazine in Japan and is published in English by VIZ Media.