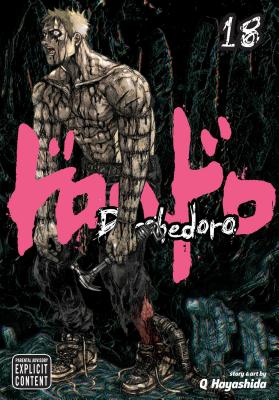 This is book number 18 in the Dorohedoro series.

With success almost in his grasp for once, Fujita is forced to strike a desperate, dangerous deal with Tetsujo, last survivor of the slaughtered Cross-Eyes. Meanwhile, En's former "cleaners" Shin and Noi venture through the Central Department Store to try and resurrect their boss. And Ebisu ... well, she's just doing Ebisu stuff. All the while, Nikaido continues to manifest stranger and stranger powers under the guidance of former Devil Asu.
Known for her bold style and seamless creation of alternate universes, QHayashida made her manga debut with Maken X Another, which ran in Magazine Z and was subsequently adapted into a video game. She followed this series with a sequel, Maken X Another Jack. Dorohedoro is her latest series.