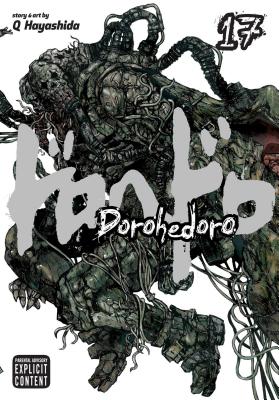 This is book number 17 in the Dorohedoro series.

Deep in the Hole, the survivors of En's family continue their mission to revive their slain leader with some "enhanced interrogation" of a Cross-Eye member. The rest of the Cross-Eyes finally come face-to-face with their long-lost boss. And Risu, Asu, and an even more powerful Nikaido find themselves on a surprisingly dangerous quest: getting her gyoza business up and running again.
Known for her bold style and seamless creation of alternate universes, QHayashida made her manga debut with Maken X Another, which ran in Magazine Z and was subsequently adapted into a video game. She followed this series with a sequel, Maken X Another Jack. Dorohedoro is her latest series.