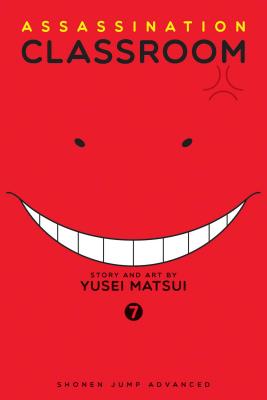 This is book number 7 in the Assassination Classroom series.

The 3-E students hope to kill on their final exams to win not only respect but a special reward. Over summer break, Nagisa, Sugino, and Maehara play amateur entomologist with…a girl? After rigorous training with the greatest assassin of all, the class launches their best assassination plan yet! Now who will save our would-be assassins from a mysterious biological weapon…?
Yusei Matsui was born on the last day of January in Saitama Prefecture, Japan. He has been drawing manga since he began elementary school. Some of his favorite manga series are Bobobo-bo Bo-bobo, JoJo's Bizarre Adventure, and Ultimate Muscle. Matsui learned his trade working as an assistant to manga artist Yoshio Sawai, creator of Bobobo-bo Bo-bobo. In 2005, Matsui debuted his original manga Neuro: Supernatural Detective in Weekly Shonen Jump. In 2007, Neuro was adapted into an anime. In 2012, Assassination Classroom began serialization in Weekly Shonen Jump.