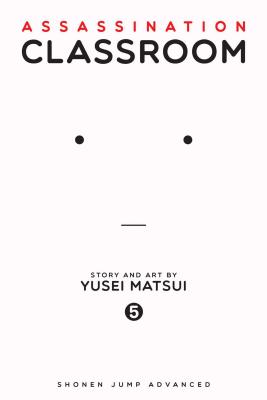 This is book number 5 in the Assassination Classroom series.

Intramural relations are at an all-time low: Principal Asano wants to crush Koro Sensei’s 3-E baseball team while Koro Sensei wants to avenge Principal Asano’s sabotage of 3-E’s midterms. Then the government sends in a new Special Forces operative—a ruthless father figure who tests Karasuma’s combat coaching skills. You’ll never guess which student does him proud! And when Koro Sensei digs a swimming pool to help his students cool off, they discover a new weakness of his—as well as how cute their classmates look in swimsuits!
Yusei Matsui was born on the last day of January in Saitama Prefecture, Japan. He has been drawing manga since he began elementary school. Some of his favorite manga series are Bobobo-bo Bo-bobo, JoJo's Bizarre Adventure, and Ultimate Muscle. Matsui learned his trade working as an assistant to manga artist Yoshio Sawai, creator of Bobobo-bo Bo-bobo. In 2005, Matsui debuted his original manga Neuro: Supernatural Detective in Weekly Shonen Jump. In 2007, Neuro was adapted into an anime. In 2012, Assassination Classroom began serialization in Weekly Shonen Jump.