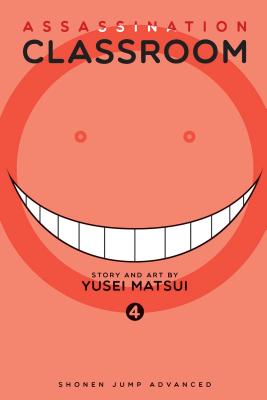 This is book number 4 in the Assassination Classroom series.

English teacher Irina’s assassination mentor makes an appearance and the two compete-using special agent Karasuma as their target. Another transfer student/would-be assassin joins the class, accompanied by a guardian who claims to be Koro Sensei’s...little brother?! A tentacle showdown ensues, sending everyone into a tentacle tizzy. Then, the 3-E students face humiliation yet again during a school baseball exhibition match. Plus, more secrets of Koro Sensei’s mysterious past revealed...!
Yusei Matsui was born on the last day of January in Saitama Prefecture, Japan. He has been drawing manga since he began elementary school. Some of his favorite manga series are Bobobo-bo Bo-bobo, JoJo's Bizarre Adventure, and Ultimate Muscle. Matsui learned his trade working as an assistant to manga artist Yoshio Sawai, creator of Bobobo-bo Bo-bobo. In 2005, Matsui debuted his original manga Neuro: Supernatural Detective in Weekly Shonen Jump. In 2007, Neuro was adapted into an anime. In 2012, Assassination Classroom began serialization in Weekly Shonen Jump.