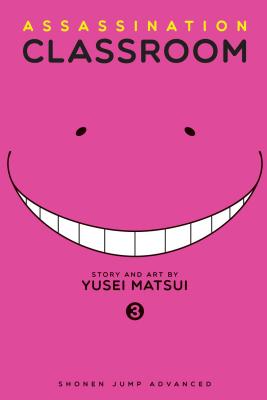 This is book number 3 in the Assassination Classroom series.

The latest addition to the misfit students of Class 3-E is a Norwegian robot specially designed to assassinate their teacher—but sadly lacking in social skills. Nothing Koro Sensei can’t cure with a little super-fast tentacle work! When playboy Maehara gets dissed by a girl for being in Class 3-E, revenge is clearly warranted—and Koro Sensei can help with that too! Then Irina, the English language teacher/sexy assassin, gets a visit from her murder mentor.
Yusei Matsui was born on the last day of January in Saitama Prefecture, Japan. He has been drawing manga since he began elementary school. Some of his favorite manga series are Bobobo-bo Bo-bobo, JoJo's Bizarre Adventure, and Ultimate Muscle. Matsui learned his trade working as an assistant to manga artist Yoshio Sawai, creator of Bobobo-bo Bo-bobo. In 2005, Matsui debuted his original manga Neuro: Supernatural Detective in Weekly Shonen Jump. In 2007, Neuro was adapted into an anime. In 2012, Assassination Classroom began serialization in Weekly Shonen Jump.