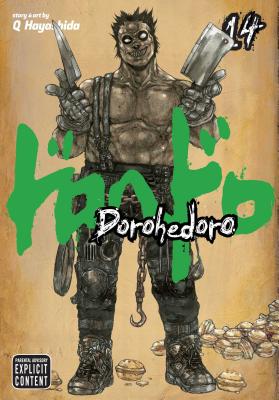 This is book number 14 in the Dorohedoro series.

Pie or die! The secret to Nikaido's magic… The goal of Kai's quest… Could the answer to all of life's mysteries possibly be found inside a single pie?! The truth awaits in this exciting installment of Dorohedoro!
Known for her bold style and seamless creation of alternate universes, QHayashida made her manga debut with Maken X Another, which ran in Magazine Z and was subsequently adapted into a video game. She followed this series with a sequel, Maken X Another Jack. Dorohedoro is her latest series.