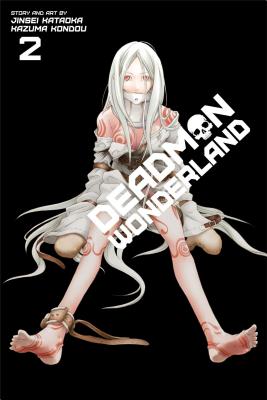 This is book number 2 in the Deadman Wonderland series.

A post-apocalyptic story of survival in a surreal prison built in the ruins of Tokyo.

Framed for the brutal murders of his classmates by the mysterious Red Man, middle school student Ganta Igarashi finds himself sentenced to death and sent to the bizarre and fatal theme park/prison that has risen from the ruins of the Great Tokyo Earthquake—a hell on earth known as “Deadman Wonderland.”

Falsely accused of murdering his classmates and sentenced to death in Deadman Wonderland, Ganta begins to learn more about life inside the prison walls. Upon hearing that the Red Man, the strange being that killed his friends, is in the G Ward, Ganta heads there seeking answers—and revenge. Instead he finds a mysterious man who calls him “Woodpecker.”