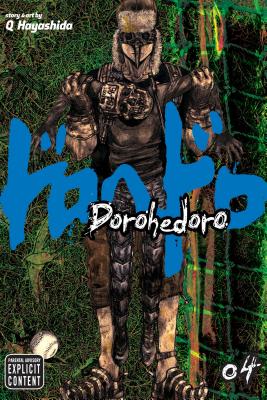 This is book number 4 in the Dorohedoro series.

Caiman and Nikaido return to the Hole, where Doc and Kasukabe manage to cure Nikaido of her deadly fungal affliction. But a prowler outside Central Hospital is watching and waiting for an opportunity to steal her away. Fujita returns to the Hole to finally kill Caiman himself. He gets close when he's recruited for a baseball match between Central Hospital and Hole Peace Hospital, but his plans change when he spots an old friend. Meanwhile, in the Sorcerer's dimension, a little accident transforms Noi into a hideous monster. It's up to Shin to stop her before she kills everyone.
Known for her bold style and seamless creation of alternate universes, QHayashida made her manga debut with Maken X Another, which ran in Magazine Z and was subsequently adapted into a video game. She followed this series with a sequel, Maken X Another Jack. Dorohedoro is her latest series.