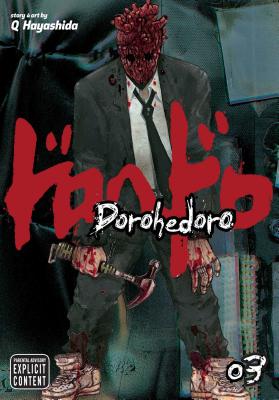 This is book number 3 in the Dorohedoro series.

While En seeks out a new partner with unique magic powers, his crew has a run-in with an underground organization that controls the distribution of "black powder," a magic-enhancing drug used by weaker Sorcerers. Meanwhile, Caiman and Nikaido spend New Year's in the haunted mansion of a mysterious doctor who specializes in the anatomy of Sorcerers. The doctor reveals to them the only known portal to the Sorcerers' dimension...
Known for her bold style and seamless creation of alternate universes, QHayashida made her manga debut with Maken X Another, which ran in Magazine Z and was subsequently adapted into a video game. She followed this series with a sequel, Maken X Another Jack. Dorohedoro is her latest series.