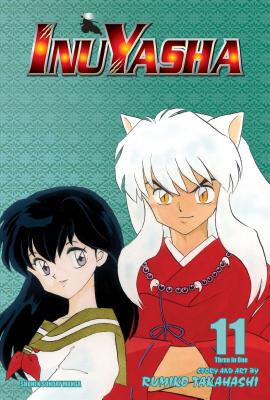 This is book number 11 in the Inuyasha VIZBIG Edition series.

The search for the final shard of the Shikon Jewel leads Inuyasha and the gang to a mountain fortress...but only the dead may enter. Meanwhile, Naraku teams up with a demon who hunts the blood of innocent villagers—just his type!

Then Kagome faces a moral dilemma. Only she can rescue her rival Kikyo from Naraku’s miasma. Will she make the right choice? Elsewhere, Naraku sends Kohaku on an evil errand...

Now a fierce battle rages in the borderland between the world of the living and the afterlife. A mysterious force attacks Inuyasha and claims to act on behalf of the Shikon Jewel itself! Naturally, Naraku joins the fray. Then, when all hope seems lost, Inuyasha receives unexpected help from his half brother!
The spotlight on Rumiko Takahashi’s career began in 1978 when she won an honorable mention in Shogakukan’s prestigious New Comic Artist Contest for Those Selfish Aliens. Later that same year, her boy-meets-alien comedy series, Urusei Yatsura, was serialized in Weekly Shonen Sunday. This phenomenally successful manga series was adapted into anime format and spawned a TV series and half a dozen theatrical-release movies, all incredibly popular in their own right. Takahashi followed up the success of her debut series with one blockbuster hit after another—Maison Ikkoku ran from 1980 to 1987, Ranma 1/2 from 1987 to 1996, and Inuyasha from 1996 to 2008. Other notable works include Mermaid Saga, Rumic Theater, and One-Pound Gospel.