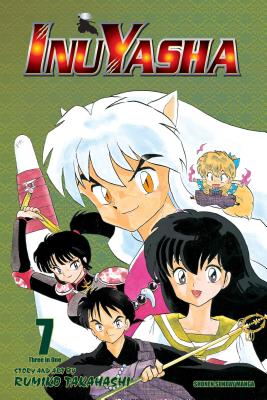 This is book number 7 in the Inuyasha VIZBIG Edition series.

Kagome's friends each face difficult challenges as Naraku intensifies his efforts to gain complete control of the shards of the Shikon Jewel. Kohaku struggles to free himself from Naraku's grip, but doing so means facing up to the terrible deeds of his past. Then, while Inuyasha battles one enemy after another in his search to gain mastery over the heirloom blade Tetsusaiga, Kagome confronts Tsubaki, yet another pawn of Naraku's and one that may poison her soul. And even Naraku's servants scheme against him when Kagura tries to bring Koga into an attempt to free herself from Naraku's control. The coming of the new moon risks exposing Inuyasha's secret—how much has Kagura seen?
The spotlight on Rumiko Takahashi’s career began in 1978 when she won an honorable mention in Shogakukan’s prestigious New Comic Artist Contest for Those Selfish Aliens. Later that same year, her boy-meets-alien comedy series, Urusei Yatsura, was serialized in Weekly Shonen Sunday. This phenomenally successful manga series was adapted into anime format and spawned a TV series and half a dozen theatrical-release movies, all incredibly popular in their own right. Takahashi followed up the success of her debut series with one blockbuster hit after another—Maison Ikkoku ran from 1980 to 1987, Ranma 1/2 from 1987 to 1996, and Inuyasha from 1996 to 2008. Other notable works include Mermaid Saga, Rumic Theater, and One-Pound Gospel.