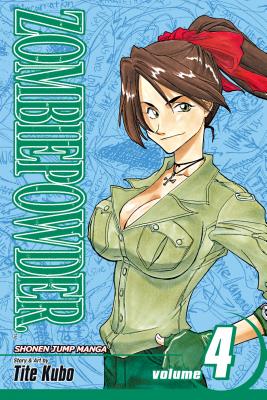 This is book number 4 in the ZOMBIEPOWDER. series.

A team of super-skilled criminals roams a science-fiction Wild West, each with their own reason to hunt for the ultimate prize: the 12 Rings of the Dead, which can raise the dead and grant eternal life.

Somewhere in the desert lies the world's greatest treasure: the 12 Rings of the Dead, the only source of the mysterious substance Zombie Powder, which can raise the dead and grant eternal life. Into this world stalks Gamma Akutabi, a man with a metal arm and a six-foot chainsaw, cybernetically enhanced master of the legendary martial art
Tite Kubo made his debut with ZOMBIEPOWDER., a four-volume series for Weekly Shonen Jump .Bleach is author Tite Kubo's second title. To date, Bleach has been translated into numerous languages and has also inspired an animated TV series that began airing in Japan in 2004. Beginning its serialization in 2001, Bleach is still a mainstay in the pages of Weekly Shonen Jump. In 2005, Bleach was awarded the prestigious Shogakukan Manga Award in the shonen (boys) category.