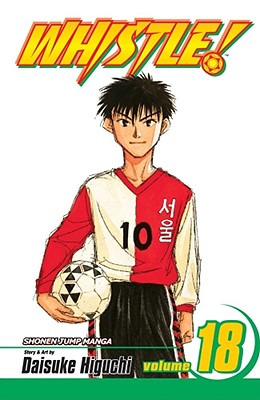 This is book number 18 in the Whistle! series.

Shô and the Tokyo Select Team travel to Korea to go head-to-head with the Seoul Select Team. The Japanese team quickly realizes that they're facing the toughest challenger they've ever met. The Seoul team is strong, aggressive and determined to win, with complicated tactics and superb teamwork. When Seoul takes a 2-0 lead in the first 15 minutes of the game, the Tokyo team members realize they need to dig deep into their hearts to find the passion and love that motivated them to play in the first place.
Daisuke Higuchi's manga career began in 1992 when the artist was honored with third prize in the 43rd Osamu Tezuka Award. In that same year, Higuchi debuted as creator of a romantic action story titled Itaru. In 1998, Weekly Shonen Jump began serializing Whistle! Higuchi's realistic soccer manga became an instant hit with readers and eventually inspired an anime series, debuting on Japanese TV in May of 2002. The artist is currently working on yet-to-be-published new series.