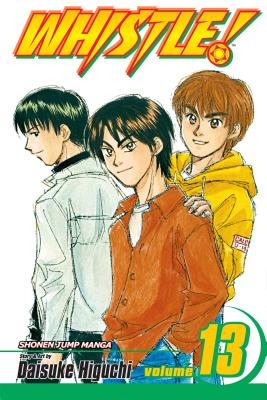 This is book number 13 in the Whistle! series.

In a practice game, Coach Saionji has the players take positions they aren't used to, and Shô comes to the painful realization that trying hard may not be enough. He must change his whole approach! Soon Shô is face-to-face with Takashi, his tough new rival for the position of forward. If Shô can't overcome his rival's domineering attitude, there's no place for him on the all-star team!
Daisuke Higuchi's manga career began in 1992 when the artist was honored with third prize in the 43rd Osamu Tezuka Award. In that same year, Higuchi debuted as creator of a romantic action story titled Itaru. In 1998, Weekly Shonen Jump began serializing Whistle! Higuchi's realistic soccer manga became an instant hit with readers and eventually inspired an anime series, debuting on Japanese TV in May of 2002. The artist is currently working on yet-to-be-published new series.