The Prince of Tennis, Vol. 11 (Paperback) 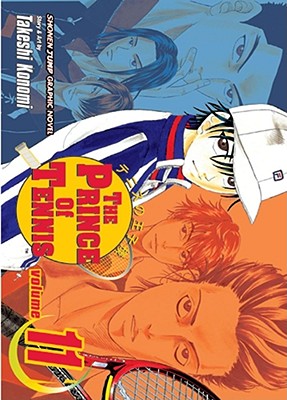 The Prince of Tennis, Vol. 11 (Paperback)

This is book number 11 in the The Prince of Tennis series.

A tennis prodigy leads his handsome tennis club to victory at the national tournament.

Four-time consecutive U.S. Junior tournament champ Ryoma Echizen comes to Seishun Academy to further his reign as The Prince of Tennis. His skill is matched only by his attitude--irking some but impressing all as he leads his team to the Nationals and beyond!

Practice games soar to a new level as the Seishun Academy intra-squad games get underway. Meanwhile, the semifinal match between Fudomine and Yamabuki at the City Tournament is put on ice when word reaches Kippei that his teammates were involved in a car accident. But the real fun begins when Seishun's Momo steps onto the court to play Yamabuki's Kiyosumi Sengoku. Momo sure wasn't prepared to face a player who uses a racket with an unusually low string tension...!
Takeshi Konomi exploded onto the manga scene with the incredible The Prince of Tennis. His refined art style and sleek character designs proved popular with Weekly Shonen Jump readers, and The Prince of Tennis became the number one sports manga in Japan almost overnight. Its cast of fascinating male tennis players attracted legions of female readers even though it was originally intended to be a boys' comic. The manga continues to be a success in Japan and has inspired a hit anime series, as well as several video games and mountains of merchandise.