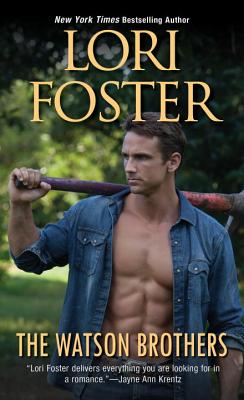 
Email or call for price
"Lori Foster delivers everything you are looking for in a romance." --Jayne Ann Krentz

"My House, My Rules"

When Ariel's headstrong ways nearly wreck one of Officer Sam Watson's sting operations--ruining her dress in the process--he offers her a ride to his place to clean up. But Ariel seems to have her own agenda, and Sam decides it's time to let her know he'll be calling the shots…

Two years ago, Gil Watson had a wild night that resulted in a daughter he never knew he had. Now he has a chance to do right by his little girl, even if it means marrying the woman who's been raising her. Fortunately Anabel Truman is anything but another bad decision…

"Good With His Hands"

As best friends, Pete Watson and Cassidy McClannahan have a "no sex" relationship. It may be a rigid rule, but it works--until Pete decides he wants to push the line and transform himself into the perfect guy he thinks Cassidy wants.

"Foster writes smart, sexy, engaging characters." --Christine Feehan
Lori Foster is a USA Today, Publishers Weekly and New York Times bestselling author. She has received the Romantic Times "Career Achievement Award" for Series Romantic Fantasy and for Contemporary Romance; Amazon's top-selling romance title for Too Much Temptation; Amazon's Top Ten editors' picks in romance for Causing Havoc; Waldenbooks' second "Bestselling Original Contemporary" romance for Say No To Joe; the BGI group's "Bestselling Original Contemporary" romance for The Secret Life of Bryan, "Bestselling Romantic Comedy" for Jude's Law, "Bestselling Romantic Suspense" for Back in Black; and Amazon's #1 Editors' Pick in Romance for Servant: The Acceptance. Lori has been featured as a clue in the New York Times crossword puzzle, and the USA Today "Quick Cross" puzzle. As well as writing a variety of romances in all lengths for multiple publishers, Lori has a successful urban fantasy series under the name L. L. Foster. Visit Lori at her website LoriFoster.com.