How to Be an American: A Field Guide to Citizenship (Hardcover) 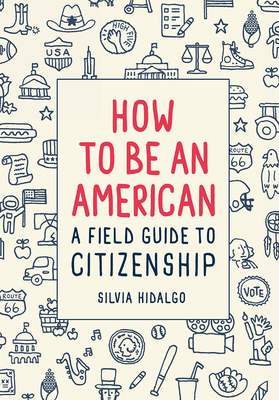 How to Be an American: A Field Guide to Citizenship (Hardcover)


Usually Ships in 1-5 Days
The current political climate has left many of us wondering how our government actually operates. Sure, we learned about it in school, but if put to the test, how many of us can correctly explain the branches of government? The history of politics? The differences and connections between local government and federal government? Enter How to Be an American. While author and illustrator Silvia Hidalgo was studying for her citizenship test, she quickly found that the materials provided by the government were lacking. In order to more easily absorb the information, Hidalgo started her own illustrated reference to civics facts and American history essentials. She’s collected her findings in How to Be an American, a freshly designed and illustrated two-color guide to all things America.
Born in Costa Rica, Silvia Hidalgo moved to the United States in 1998. Currently an artist as well as a freelance graphic designer and illustrator, she has worked for corporations such as SRAM and Motorola. She lives in Chicago.
"...a freshly designed and illustrated two-color guide to all things America."
— Bustle