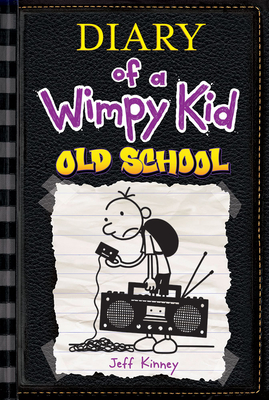 This is book number 10 in the Diary of a Wimpy Kid series.

Life was better in the old days. Or was it?

That’s the question Greg Heffley is asking as his town voluntarily unplugs and goes electronics-free. But modern life has its conveniences, and Greg isn’t cut out for an old-fashioned world.

With tension building inside and outside the Heffley home, will Greg find a way to survive? Or is going “old school” just too hard for a kid like Greg?
Jeff Kinney is a #1 New York Times bestselling author of the Diary of a Wimpy Kid series and the Awesome Friendly Kid series. He is a six-time Nickelodeon Kids’ Choice Award winner for Favorite Book and has been named one of Time magazine’s 100 Most Influential People in the World. He spent his childhood in the Washington, D.C., area and moved to New England, where he and his wife own a bookstore named An Unlikely Story.

"The Wimpy Kid series marches on...These diaries continue to be solid steppingstones into the literary world for any reluctant reader.Harmless fun that neither rocks the boat nor swings for the fences."
— Kirkus