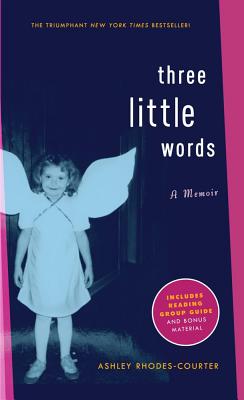 
Email or call for price
An inspiring true story of the tumultuous nine years Ashley Rhodes-Courter spent in the foster care system, and how she triumphed over painful memories and real-life horrors to ultimately find her own voice.

"Sunshine, you're my baby and I'm your only mother. You must mind the one taking care of you, but she's not your mama." Ashley Rhodes-Courter spent nine years of her life in fourteen different foster homes, living by those words. As her mother spirals out of control, Ashley is left clinging to an unpredictable, dissolving relationship, all the while getting pulled deeper and deeper into the foster care system.

Painful memories of being taken away from her home quickly become consumed by real-life horrors, where Ashley is juggled between caseworkers, shuffled from school to school, and forced to endure manipulative, humiliating treatment from a very abusive foster family. In this inspiring, unforgettable memoir, Ashley finds the courage to succeed - and in doing so, discovers the power of her own voice.
Ashley Rhodes-Courter has been featured in Teen People, The New York Times, USA TODAY, and Glamour, as well as on Good Morning America. Her first memoir, Three Little Words, began as an essay, which won a writing contest for high school students, and was published in The New York Times Magazine. She is also the author of Three More Words. A graduate of Eckerd College and a champion for the reformation of the foster care system, Ashley speaks internationally on foster care and adoption. Visit her at Rhodes-Courter.com.

"Ashley Rhodes-Courter is triumphant in her quest to overcome insurmountable odds. I celebrate her courage to seek out the best in humanity in spite of its failings." - Victoria Rowell, New York Times bestselling author of The Women Who Raised Me: A Memoir

"Nine years in the foster care system could ruin a kid. But [Ashley] not only survived, she's thrived." -Teen People

"The author's ability to form intelligent, open-minded conclusions about her traumatic childhood demonstrates her remarkable control and insight, and although there are plenty of wrenching moments, she succeeds not in attracting pity but in her stated intention, of drawing attention to the children who currently share the plight that she herself overcame." --Publishers Weekly