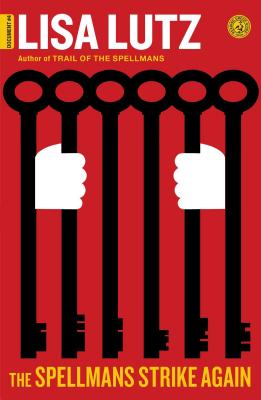 “The fourth and final installment of the Spellman Quartet finds the Spellmans spying on each other more than they are for their clients. Mom is keeping tabs on Isabel's dates in the hopes that she'll get married. The kids want to know why parts of the house are disappearing. Could someone really be stealing doorknobs and light fixtures? Lutz has written a quirky and sometimes bizarre tale that's definitely good for a laugh.”
— Anne McMahon, Boswell Book Company, Milwaukee, WI

In Document #4 of the Edgar-nominated series detailing an outrageously funny family of detectives, former wild child and private investigator Izzy Spellman finally agrees to take over the family business. But the transition won’t be a smooth one…

First among her priorities as head of Spellman Investigations is to dig up some dirt on the competition, slippery ex-cop Rick Harkey—a task she may enjoy a little too much. Next, faced with a baffling missing-persons case at the home of an aging millionaire, Izzy hires an actor friend, Len, to infiltrate the mansion as an undercover butler—a role he may enjoy a little much.

Meanwhile, Izzy is being blackmailed by her mother (photographic evidence of Prom Night 1994) to commit to regular blind dates with promising professionals—an arrangement that doesn’t thrill Connor, an Irish bartender on the brink of becoming Ex-boyfriend #12.

At Spellman headquarters, it’s business as unusual. Doorknobs and light fixtures are disappearing every day, Mom’s been spotted crying in the pantry, and a series of increasingly demanding Spellman Rules (Rule #27: No Speaking Today) can’t quite hold the family together. Izzy also has to decipher weekly “phone calls from the edge” from her octogenarian lawyer, Morty, as well as Detective Henry Stone’s mysterious interest in rekindling their relationsh . . . well, whatever it was.

Just when it looks like things can’t go more haywire, little sister Rae’s internship researching pro bono legal cases leads the youngest Spellman to launch a grassroots campaign that could spring an innocent man from jail—or land Rae in it.

The Spellmans Strike Again is hands down the most hilarious, thrilling, and moving book in this bestselling, award-nominated series. And it proves beyond a reasonable doubt that Isabel Spellman, no matter how much she matures, will never be able to follow Rule #1: Act Normal.

Lisa Lutz is the author of the New York Times bestselling, Edgar Award– and Macavity Award–nominated, and Alex Award–winning Spellman Files series, as well as the novels How to Start a Fire, The Passenger, and The Swallows. She lives and works in upstate New York.

“Move over, Carl Hiaasen. This tale of the Spellman family is irresistible, and you hate to see the romp end.”
—St. Louis Post-Dispatch

“Lie back and enjoy this tale of intergenerational gumshoe mayhem.”
—Kirkus

“If you like Janet Evanovich, you are going to love the Spellmans."
—The Globe and Mail (Canada)

“Another engaging blend of wisecracks and crime-solving.”
—Booklist

“This is hands-down the most hilarious, thrilling and moving book in this best-selling series.”
—The Oklahoman