No Rest for the Wicked (Immortals After Dark #3) (Mass Market) 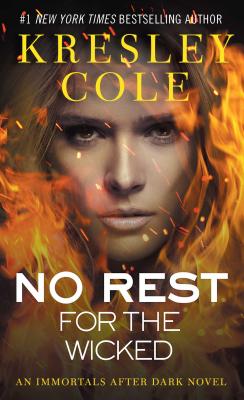 No Rest for the Wicked (Immortals After Dark #3) (Mass Market)

This is book number 3 in the Immortals After Dark series.

New York Times and USA TODAY bestselling author Kresley Cole delivers a scorching tale about a foreboding vampire who lives in the shadows—and the beautiful assassin determined to hunt him down—in the “sensational” (RT Book Reviews) second novel of the Immortals After Dark series.

Centuries ago, Sebastian Wroth was turned into a vampire against his will. Burdened with hatred and alone for ages, he sees little reason to live. Until an exquisite, fey creature comes to kill him, inadvertently saving him instead.

When Kaderin the Cold Hearted lost her two beloved sisters to a vampire attack long ago, a benevolent force deadened her sorrow—accidentally extinguishing all of her emotions. Yet whenever Kaderin encounters Sebastian, her feelings—particularly lust—emerge multiplied. For the first time, she’s unable to complete a kill.

And when the prize of a legendary month-long contest is powerful enough to change history, Kaderin will do anything to win it for her sisters. Wanting only to win her, forever, Sebastian competes as well, taking every opportunity—as they travel to ancient tombs and through catacombs, seeking relics around the world—to use her new feelings to seduce her. But when Kaderin is forced to choose between the vampire she’s falling for and reuniting her family, how can she live without either?
Kresley Cole is the #1 New York Times bestselling author of the Immortals After Dark paranormal series and the young adult Arcana Chronicles. Her books have been translated into over twenty foreign languages, garnered three RITA awards, and consistently appear on the bestseller lists in the US and abroad. Before becoming a writer, Cole was a world-ranked athlete, coach, and graduate student. She has traveled over much of the world and draws from those experiences to create her memorable characters and settings. She lives in Florida with her family and “far too many animals,” and spends any free time traveling. You can learn more about her and her work at KresleyCole.com or Facebook.com/KresleyCole.