All Our Broken Idols (Hardcover) 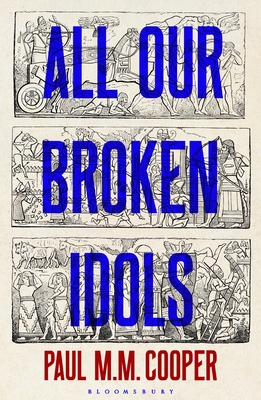 All Our Broken Idols (Hardcover)

Historical fiction Book of the Month in The Times

Assyria, in the reign of Ashurbanipal. For Aurya and her daydreaming brother Sharo, every day is a struggle for survival, as they dodge the beatings of their drunken father and scrabble for scraps of food. One violent evening, everything changes. Soon, they are on the barge of King Ashurbanipal, bound for the beautiful, near-mythical city of Nineveh. Their fates become inextricably bound to that of the king – and the injured lion captured by his men.

Twenty-six centuries later, British-Iraqi archaeologist Katya joins a dig in Mosul to protect the ancient ruins of Nineveh from organised looters, following in the footsteps of her dead father. When she and Salim, a fellow archaeologist, discover an astonishingly beautiful and rare carving, they know their find will bring the world's attention to Mosul. But the real world crashes in to their studious idyll to catastrophic, devastating effect when ISIL storm Mosul – and take Katya, Salim and local girl Lola hostage.

All Our Broken Idols is hauntingly evocative, a novel in which past and present lives intertwine and stories travel across the ages. It is a story about the importance of art and the threat it poses to those in power. And it is about bravery; standing up for what you believe in, and who you love.

Paul Cooper was born in South London and grew up in Cardiff, Wales. He was educated at the University of Warwick and the UEA. After graduating, he left for Sri Lanka to work as an English teacher, where he took time to explore the ruins both ancient and modern. He has written for magazines, websites and also worked as an archivist, editor and journalist. He also hosts the podcast Fall of Civilizations. His critically acclaimed debut novel, River of Ink, was published by Bloomsbury in 2016.

“Dual timeline novels often fail: one strand is more interesting than the other, or the links between the two are contrived. Not here. Both stories are superbly told and share the same preoccupation - the coexistence of cruelty and creative beauty

” —THE TIMES, Historical Novel of the Month

“With its two female protagonists separated by more than 2,500 years of history, and its narrative strobing back and forth between them, this novel is ambitious, atmospheric stuff

“An engrossing, seamlessly written deliberation on the enduring power of art” —MAIL ON SUNDAY

“Cooper's trips to Iraq and his historical interests (he hosts the excellent Fall of Civilisations podcast) lend All Our Broken Idols authenticity. The novel underlines the fact that people in Iraq have always suffered – but always fought, too, for their identity and culture; the greatest treasure of all

“Praise for River of Ink: 'Potent, beautiful and wholly absorbing, Cooper's portrait of a reluctant revolutionary had me in thrall from its first chapter. A wonderful, memorable debut” —MADELINE MILLER

“Cooper endows his work with persuasive historical accuracy and detail, but the “juice” of his own work is the intensely poetic quality of his prose … There is enough astonishing quality in this first novel for us to hope that Cooper will soon produce another” —INDEPENDENT

“It isn't easy to write about the past with both a hesitant watchfulness and a calm assurance, to make it vivid and strange and yet also, in a fundamental way, ours, but that's exactly what Paul Cooper has achieved – with considerable aplomb – in River of Ink” —AMIT CHAUDHURI

“Masterly … A powerful and timely fable about freedom, resistance and the secret might of the weak” —FINANCIAL TIMES

“Vivid and compelling” —MAIL ON SUNDAY

“A striking first novel from an author with a rare skill for deploying heavy research with a light touch, for revelling in the seductive possibilities of style without losing sight of narrative drive, and for making profound points while also delivering first-rate entertainment. Paul M. M. Cooper's own pen is certainly a formidable weapon, and it will be exciting to see him wield it again in years to come” —ASIAN REVIEW

“In his first novel, Cooper vividly reconstructs a long-buried society and, creates in Asanka – a coward reluctantly forced into acts of courage – a likeable, multifaceted narrator” —SUNDAY TIMES

“A highly accomplished debut: Cooper's writing glides from moments of grace and beauty to pure horror in this enthralling novel” —MAHESH RAO

“River of Ink is an outstanding novel from a very talented debut author ... Cooper's name has the potential to become synonymous with historical literature ... He has done something which all good authors must do: he has written a novel that transcends the page and continues to exist in mind of the reader” —NEW WELSH REVIEW